At Kaleidos, I'm surrounded by people who is always studying new languages, new frameworks. Functional programming has been the new guy in our office. Haskell, Clojure or Fruskis (!) were at our table, and conversations. Even in our Kosdem, some colleagues brougth to the group the desire and convenience of enlarging our stack and offer also projects made in Clojure.

Once or twice I peeked into some tutorial. Functional programming and monads were more than I could manage by myself. Then I found Clojure Bridge and I knew at first that I wanted to be there. 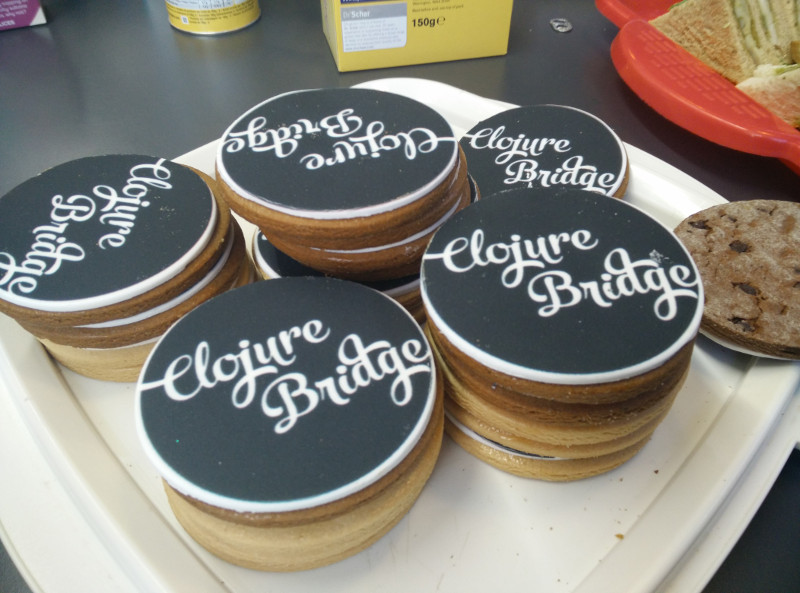 I joined the first clojure workshop in London. I really hope it's not the last. I would love to repeat it, and join the dojos of the group. As you will see, I have only good words about the experience and the language.

The workshop was divided into two days: friday was meant for getting the environment ready (Installation party!) and knowing each other. As I went to the party with everything installed, thanks to a super clear tutorial, I could meet and help other attendants.

On Saturday we could go through the workshop itself. Some presentations and demos, and we were divided into very small groups. Each group of 6 people had at least 2 teachers, which was key to take advantage of the course. All the groups (as far as I know) followed the same tutorial, but each group were deciding the speed depending on the previous knowledge, the doubts, the interest on a particular area, etc.

I could follow the workshop quite well, and I was lucky also because in my group were other spanish girls, who helped me when I got lost in translation (because sometimes this is not about technology…). I totally liked the language: expressive, concise, and forced me into new ways of thinking.

When the workshop had finished, I could talk to two teachers who, after all the day teaching, were so nice to tell me the basis about testing with clojure and using bash/vim for developing instead of Lighttable.

Thanks to the organizers, who made it seem easy, and the sponsors, who provided us with (tons! of) food, the venue, the stickers… It's refreshing to find companies that support this initiatives.

People were awsome, and very cheerful, and I felt really welcome :) My only complain is the workshop was too short!! I would like to keep learning Clojure, improve my skills and know better this community. Hope to see you soon!!