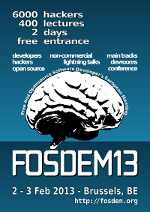 FOSDEM is the most important free and open source software developers’ meeting in the world. It gathers in the ULB developers (about 5K according to the organizers) from all Europe for 2 intense days. Seven tracks and thirty dev rooms: security, community, python, nosql, cross distro… 474 speakers and 486 sessions (sat, sun), all of them around open source.

This is the second time I attend the event, and it's an amazing experience. The atmosphere was great, with people coding everywhere and poking around, sessions all the time (it was difficult to choose the talk), stands with merchandising and tons of conversation in the halls. On Saturday nigth, @superalex decided that this blog had to be served with an nginx (instead of previous Apache) inspired by this talk and so he did!!

To sum up the good stuff:

To improve next time (IMHO):

Besides, I had the pleasure of talking with people of the PSF (join us!) who gave me great advices on organizing events. The most remarkable thing for me was noticing open source enjoys good health: many people willing to share and be free!!